Sugar-Salem Volleyball rolled undefeated through the state tournament! The Diggers opened up the tournament with a dominant 25-8, 25-7, 25-21 win over Timberlake. Later that day, the Diggers shook off some rust in the first two games against Fruitland, falling 17-25 followed by an epic 32-34 loss. The Lady Diggers rallied and hammered Fruitland 25-8 in the third game, and finished them off 25-21 and 15-12. Sugar then avenged a championship loss to Filer last year with a 4-set win, and awaited their final opponent, who ended up being Fruitland in the double-elimination tournament. Sugar showed no signs of rust this time around, and dispatched Fruitland in 3 games to win the state title! 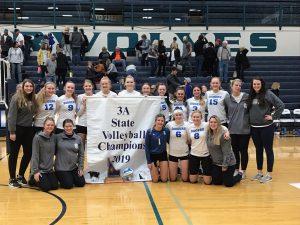 The win is the third state title for the volleyball program in the last four years, and head coach Cami Dodson has taken home either first or second place in the state tournament each of the last five years. Her program looks to continue its success, with several underclassmen pacing the program for continued success.