Skip to content
Sugar-Salem Drama Presents: Night of the Monster 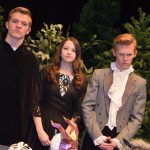 1955, Hollywood. Galaxy Picture’s mogul, Max McCallister, has hired famed Broadway playwright Henry Rhodes-Wilson to write a screenplay for the upcoming film—Night of the Monster. The film is an adaptation of Lazlo Reihnhart’s classic horror novel, “The Night of the Beast.”

Filming on location in Maiden Hills, California, Henry tries desperately to maintain the integrity of Reihnhart’s work. However, the constant demands of a Galaxy Pictures film drives Henry over the edge.  He starts having conversations with Lazlo Reihnhart himself, but Lazlo has been dead for almost 100 years! To make matters worse, Henry keeps waking up in the bushes outside the filming area with no memory of where he has been or how he got there. Henry later learns that someone has been murdered on the set! Could he be the mysterious killer?

Henry isn’t the only one with a secret to hide. Come meet the cast and crew and find out just who will survive the Night of the Monster.