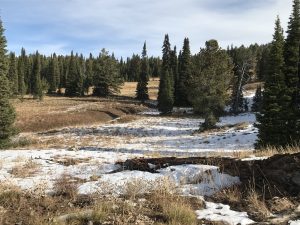 Clearing in the Jedidiah Smith Wilderness

Mr. Romrell’s Physical Science class recently launched a high-altitude balloon to the stratosphere–reaching a height of more than 100,000 feet. The students were tasked with designing a space suit to protect Marshamallownauts on their journey–and the test was a success! Both Marshmallownauts survived their journey in the thin atmosphere above earth, and were able to land safety with a parachute and the other instruments aboard the flight. In addition to testing spacesuits, the balloon was fitted with two cameras, data loggers to track temperature and pressure, GPS tracking, and electronic warmers to prevent the equipment from failing in the extreme cold of the upper atmosphere.

Flight Path of the Balloon and Parachute

However, despite the careful planning of the class, the entire mission was almost lost to the wilderness. Upper altitude winds blew stronger than predicted, and the parachute trip down sent the balloon deep into the forest near the Tetons. Mr. Romrell was able to use the GPS tracker to hone in on the location, and combining that information with Google Maps was able to determine a plan to retrieve the Marshmallownauts and their scientific payload and bring them back home safely–after a bit of a hike through the Jedidiah Smith Wilderness area. Fortunately for the Marshmallownauts, they had landed in a clearing in the forest and were not stranded in the tree tops.